It was October 19, 1962, and this young couple was married at the Warring Memorial Methodist Church in Whitney, Nebraska.  Bob and Naomi (Sibert) Galey celebrated their 50th wedding anniversary in October 2012.  Daughters Brenda Galey and Linda Turnbull -- along with numerous other families and friends -- helped them mark the occasion.  Bob and Naomi  were married by Reverend H. C. Johnson, long-time paster of the church.  You'll find more photos in our Galey Gallery.
No comments:

It was six years ago this month that nearly three dozen Galey family members converged on Chadron, Nebraska, for an opportunity to get acquainted, reacquainted, and simply spend some good time together.

It seems like decades ago.  Perhaps it's our advancing age, those years when we come to realize that the gift of life is not permanent, and that we should cherish it – more importantly, to embrace those we know and love, and celebrate the lives we've had.  And the moments we can share now.

As this Galey family website so obviously reveals by its all too infrequent  postings – we continue to lose loved ones.  But we rejoice the new family members who have joined us, those still in our midst, and those who will carry on after we're gone.

Of course, much of the joy we continue to share are reflections of the good moments of years gone by.

So we share here a photo from yesteryear.  We don't know yet where it was taken, but we'd guess maybe in a park –  Chadron State Park – or more likely, in a wooded nook tucked away somewhere in Oregon where the two subjects grew up. 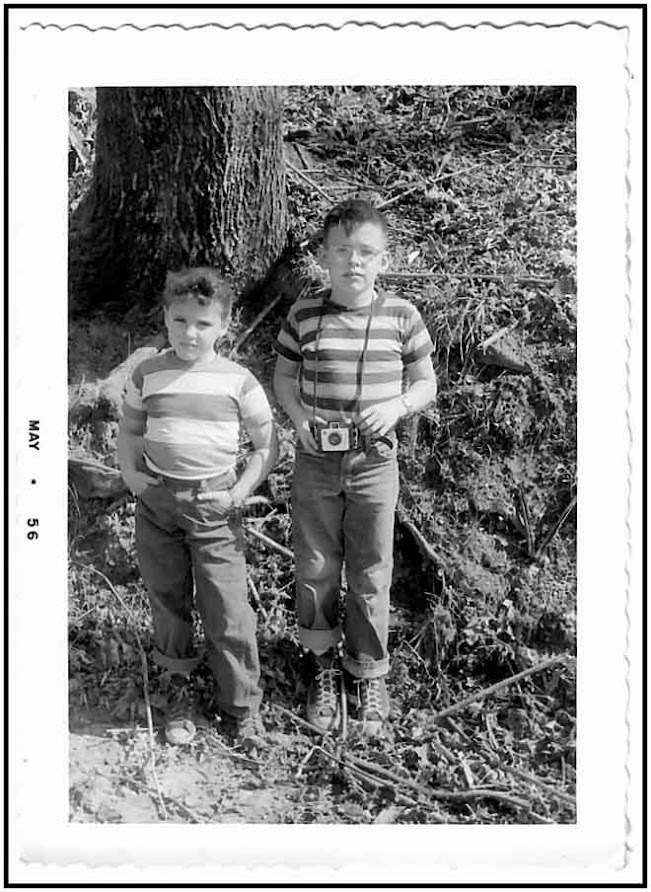 Depicted are siblings 8-year-old Mary Jane Blosser  and her older brother Jon Charles Blosser – obviously an aspiring photographer – aged 10 when this image was captured in May of 1956.  Mary Jane and Jon are the children of Ivan and Oma Louise (Galey) Blosser, who lived and worked most of their lives in Oregon, where Mary Jane and Jon were raised. Handwritten information on the back of the photo indicates the picture was "Taken by Tommy," cousin Tommy Galey, who would have been 21-years-old at the time.

Thanks to Margaret Ellen Galey for sharing this photo!  See more images in our Galey Photo Gallery! 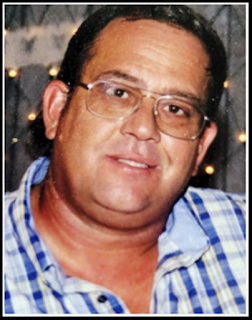 Gary Gene Galey Jr., age 60, of Crawford, Nebraska, passed away peacefully surrounded by family on Friday, July 30, 2021, at Regional West Medical Center in Scottsbluff, Nebraska. His Memorial service will be held at 10 am on Saturday, August 14, 2021 at Christ Community Church in Crawford, Nebraska with Pastor Steve Mallery officiating. Inurnment will follow at the Crawford City Cemetery. A memorial has been established to the Friends of Pets in Chadron, Nebraska. Online condolences may be left at www.dugankramer.com.

Gary was born to Gary Sr. and Zoleta Galey on February 11, 1961. He graduated high school from Crawford High School in 1979. Immediately after graduating, he began his long career at BNSF Railroad until he retired in 2016. He raised exotic birds and animals throughout his life, which was his true passion. He had two children, Dezarae Brandt and Chance Galey. Gary enjoyed traveling to watch his son, Chance, play sports. He enjoyed nearly daily phone calls with his daughter, Dezarae. He was extremely proud his children graduated college and would often say he thought he did “okay” with raising his children. Gary enjoyed being outdoors, woodworking, spending time with his animals, riding ATVs, and planning his next get rich adventure. He kept a small circle of close family and a few friends. Gary was admired for his ability to be honest and stay true to his colors, despite the adversities that would come his way. His favorite quote was “Well that didn’t go according to plan. Hang on this could get a little western!”

The past few years were not always easy for Gary. He was grateful for his family, friends, and neighbors that were willing to lend a hand. The Galey family would like to extend a special thanks his neighbors, Tim and Connie Bosak, Aaron Young, and his dear friend, Dale Ray Rising.

Gary is survived by his father, Gary Sr., who was always there for him; his two children, Dezarae (Jason) Brandt and Chance (Jenna) Galey; five grandchildren, Ava, Jaxson, and Charlie Brandt and Ayden and Kellyn Galey; his brother, Jay (Meloni) Galey; nephew, TJ Galey and nieces Jaycy and Kelsey Galey; uncles and aunts, Bob and Naomi Galey, Larry and Karen Miller, Margaret Galey, and Kay Galey; and many cousins.

A celebration of life for 76-year old Zoleta Galey of Crawford, Nebraska, was held Saturday, Dec 28, 2019 at Christ Community Church in Crawford, followed by a luncheon at the Eagles Club.  While the winter storm that hit the region prevented several people from making it to Crawford, the church was nearly filled by those paying their respects to this remarkable lady. 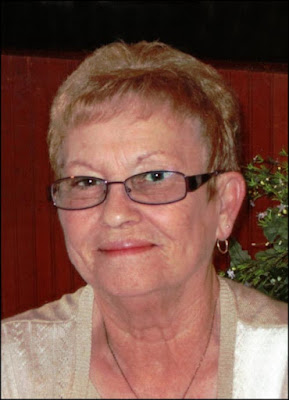 Zoleta Pearl (Hamaker) Galey was born to Tom and Doris Hamaker October 20, 1943 in Crawford.  She passed away December 20, 2019 at Regional West Medical Center in Scottsbluff surrounded by her family.

Zoleta married Gary Galey, July 29, 1960 in Scottsbluff.  They had two sons, Gary Gene of Crawford and Jay of Riverton, Wyoming.

She loved life and made it fun for everyone around her.  Zoleta had so many wonderful stories to share and was always able to make everyone laugh, even in her final weeks of life in the hospital at Scottsbluff. The nurses and staff loved her.  She touched so many with her wit and kind heart.

Zoleta and Gary had a revolving door at their home – and the coffee pot always on!  They enjoyed having so many family and friends in their home.

She thrived having her family around her.  She and Gary took their grandchildren on many trips in the summer, making life-long memories for all of them.  And she loved Christmas!  All the kids and grandkids would arrive at their home on Christmas Eve and spend the night.  Christmas day was a joyous time of presents, laughter, good food and much love.

Zoleta is survived by her loving husband Gary, who was always by her side;  their two sons, Gary Gene of Crawford and Jay (Meloni) of Riverton, Wyoming; brothers-in-law and sisters-in-law Bob and Naomi Galey of Whitney; Larry and Karen Miller of Spearfish, South Dakota; Margaret Galey of Lansing, Michigan; and Kay Galey of Chadron;  four grandchildren,  Dezarae Brandt (Jason) of Gering and Chance (Jenna) of Broomfield, Colorado;  Jaycy Galey of Omaha, and Thomas James of Casper; two nephews, Damon Bass (Tawyna) of Alliance, and Brooke Bass (Jody) of Crawford;  three grand nephews, Brayden and Keagan Bass of Alliance and Travon Bass of Crawford.  Also surviving are eight great-grandchildren, many nieces and nephews, and numerous cousins.

Zoleta was preceded in death by her parents and sister, Reba, whom she missed dearly.  Also, brother-in-law Tom Galey and wife Dorothy Galey and brother-in-law Bud Galey along with many aunts and uncles.

Funeral and burial arrangements were under the care of Chamberlain Funeral Home.  Zoleta Galey is at rest in the Crawford City Cemetery. May she rest in peace.
No comments:

Bob Galey returns to the Railroad....for a day of memories! 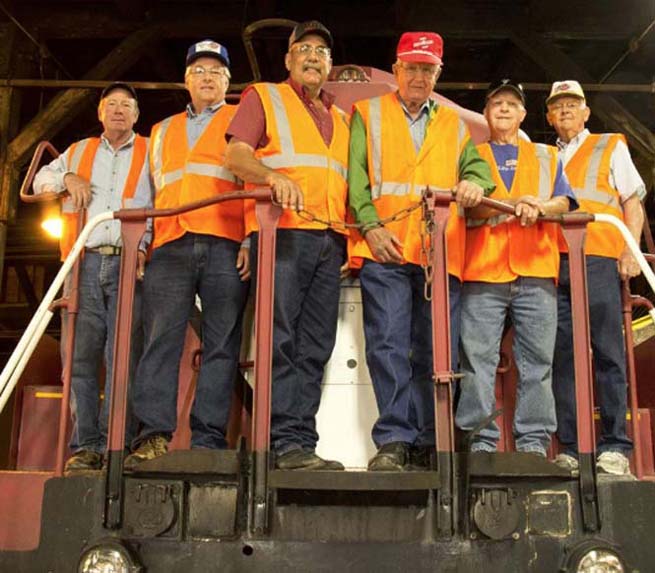 The fellow in the red ball cap on this "Iron Horse" diesel is the son of the cowboy atop a horse at the very top of this website.

Standing on the front of the old diesel with other C&NW railroad veterans, 82-year-old Bob Galey is still farming east of Whitney on the same place his parents, Tom and Eva Galey, leased and farmed until Tom died in 1958.  That's Tom Galey, Sr. on the horse.  And while Bob's three brothers – Tom, Bud, and Gary – pursued careers elsewhere, Bob remained on the farm, eventually marrying Naomi Sibert of Crawford and buying the farm.  And that's where they raised their daughters, Brenda and Linda.

Bob's older brother, Tom, made a career as a Navy SeaBee and retired with his family to Lubbock, Texas, where he died in 2006.  A younger brother, Bud, was a true cowboy and worked in the Nebraska Sandhills, providing for his family as a ranch foreman until his death in 1996.  Another younger brother, Gary, served a stint in the Navy before settling in Crawford, Nebraska, where he raised his family while working and then retiring from Kansas-Nebraska Natural Gas Company and operating a grocery store for several years.  Younger sister, Margaret Galey, who worked many years at Chadron State College, is retired and lives in Lansing, Michigan.  Younger sister, Karen Miller,  retired after working as a Medical School secretary in Pennsylvania and now lives in Spearfish, South Dakota.  You'll find other bits and pieces of information about the family elsewhere on this website. 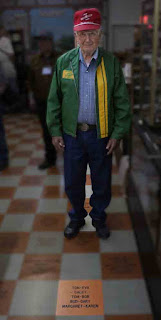 Despite maintaining and expanding the farm, Bob Galey also had others jobs over the years.  Perhaps the most important one was working for the Chicago & Northwestern Railway in Chadron.  Working as a Machinist's Helper beginning in 1969, he toiled in the old roundhouse the better share of 20 years until  his retirement from C&NW in 1989.

When the Chicago & Northwestern Historical Society decided to hold their annual meeting in Rapid City, they elected to spend one day in Chadron, visiting the old roundhouse and the Dawes County Museum.  About a dozen or so "old-timers" were recruited to host the conference attendees, answering questions they might have about the place they all worked many years ago.

While at the museum, Bob also re-visited the Galey Family tile  (shown at left) commemorating their support of the Dawes County Museum when it was under construction.  "Selling" tiles to be exhibited on the museum floor – and some on the walls – was one of many fundraising initiatives shortly after the museum moved to its present location south of Chadron.  Click on the photo to take a closer look.
No comments: 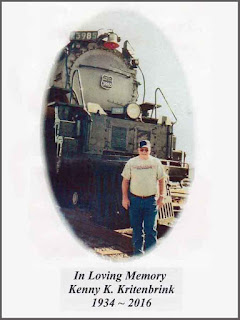 Kenny passed away at the Veteran's Center at Fort Meade, South Dakota on October 16 at the age of 82.  Although he had been in failing health for some time, it was only in the last few weeks that his mobility was impaired to the point that he was unable to get out and have coffee with friends and family.  He had joined many Cunningham and Galey family relatives just last summer at Wilson Park in Chadron for a Galey family reunion.

There was a huge turnout for Kenny's service at Chamberlain Chapel in Chadron on Saturday, October 29 -- with standing room only.

During the inurnment ceremony at the Fort Meade National Cemetery this morning, it seemed almost a bit of divine intervention that the haunted strains of a train whistle could be heard from the railroad tracks behind the cemetery.

All Aboard for Kenny's final destination:  The Pearly Gates.
No comments: 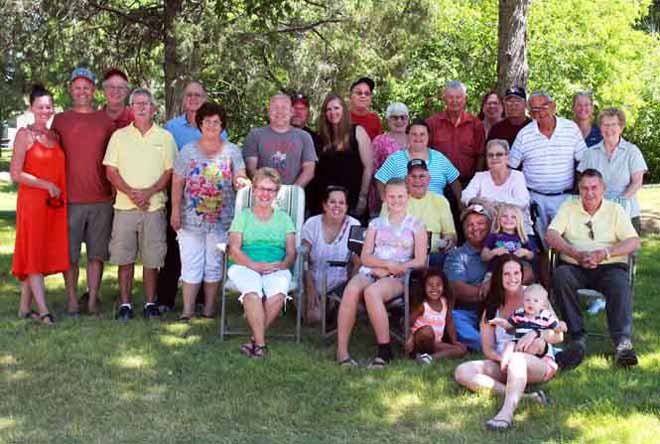 Although a smaller turnout than hoped for, Galey family members from California, Arizona, Wyoming, South Dakota, and Nebraska attended a family reunion at Wilson Park in Chadron, Nebraska last week (June 18-19, 2016). We definitely missed our "Texas contingent," which -- like all things Texan -- would likely have been the largest group! All the Galey "cousins" here are descended from Elisha & Eliza Galey, with a smattering of Cunningham cousins descended from Rayburn & Margaret Cunningham. To learn who all these folks are -- and enjoy a few other snapshots -- visit our Galey Reunion - 2016 photo gallery.
No comments:

Galey Gallery has lots of images 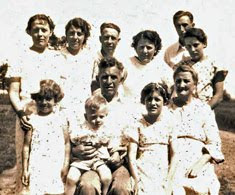 Thanks for visiting Galey Family Archives. This site was created and is maintained by Larry and Karen (Galey) Miller, primarily for emerging genealogical information; however, we'll occasionally post other items as may be appropriate. If you have Galey family-related information or photos you'd like to contribute, we encourage you to send us an e-mail at: galeymedia@gmail.com or post a comment. By the way, the young gent on the horse in the photograph above is James Thomas Galey, probably taken near Skidmore, Missouri around 1910.